How To Increase Happiness: International Day of Happiness 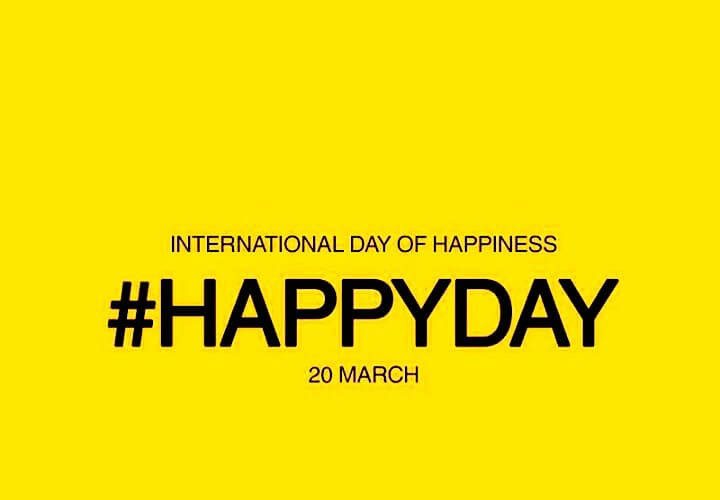 Today is the International Day of Happiness, a campaign that was first initiated by the United Nations to be a global day of celebration. To get into the spirit of the day, let’s take a look at some fun facts around Happiness.

Before we get started though, have you ever met someone who truly doesn’t want to be happy? I didn’t think so. Even those that are suffering from disorders such as depression are experiencing a lack of happiness that they would love to regain. It is an innate desire within everyone to experience true happiness.

I used to always think that people are either the type to be generally happy, or generally unhappy, with little that fell in-between. The truth is that there is a whole lot more to the emotion of happiness than that. Happiness, overall, is such a complex notion that it’s been studied up and down by dedicated professionals for years.

Abraham Lincoln once said, “Folks are usually about as happy as they make their minds up to be,” and as it turns out, the former US president wasn’t too far off from what scientists would themselves conclude a century and a half later. In recent years, we’ve learned that happiness is far more than something which all men have an equal right to pursue. Happiness is a human function.

So with that in mind, put on a smile, grab a seat, and let’s talk all things happiness.

According to a study published in the British Medical Journal, happiness is contagious! People who spend time around other happy people find that they themselves experience more positive emotions.

Yes, it turns out that surrounding yourself with happy people will cause that happiness to rub off on you. Those findings have been backed up by researchers who looked at the Framingham Heart Study, which looked at the health and happiness of more than 4,700 residents of the city of Framingham, Massachusetts, and found that people who reported feeling happy tended to form their own “clusters” with one another. They found that your likelihood of happiness rises 15.3 percent if a family member or close friend is happy.

Doing Good Deeds for others is beneficial to yourself

Have you ever noticed how elevated your mood becomes after you do something nice for someone else? When it comes to happiness, by making others happy we can make ourselves happy, too. Studies have shown that when we do something like hold the door for a stranger, donate to a charity, or bring a meal to a friend, our brain triggers feelings of reward.

According to the Huffington Post, performing good deeds is one of the fastest ways to get some happiness into our own lives.

Sleep contributes greatly to our Happiness

Interestingly, the amount of sleep we receive can have a huge effect on our overall happiness. A study which observed a large group of college students found that those who were sleep deprived had a harder time registering and remembering positive ideas, but an easier time remembering negative ones. Specifically, the sleep-deprived students later remembered 81% of the negative words they had been told during the study, but only 31% of the positive words.

For those of you going through high school, this stage of your development requires a recommended amount of 8-10 hours of sleep. If your folks are hassling you for sleeping in, just remember that your body requires it (maybe be mindful of this fact and go to bed earlier, then again I’m not your mother).

Outdoor time can increase your happiness

A research study published in Global Environmental Change found that people tend to be happier when outdoors rather than being indoors. While conducting their research, those leading the study found that people are at their happiest when  in warm weather and near water. Beach, anyone?

Happiness Has Power Over Your Immune System and Pain Receptors

According to a research study published in Psychosomatic Medicine, people who have more positive emotions are less likely to develop the common cold. People who routinely exude positive emotion have a strengthened immune system as a result. Exactly what takes place in the body to cause such a phenomenon isn’t yet clear, but it sounds like a mighty good reason to wake up each day with a smile.

Not only can happiness help with our immune systems but it can also stand-in as a painkiller. A 2005 study published in the Journal of Consulting and Clinical Psychology observed a number of female patients suffering from chronic pain and arthritis. Amazingly, the study concluded that when those patients experienced happiness, excitement, and laughter, their pain decreased significantly.

Listening to music can alter your mood

Much like surrounding yourself with happy people can have a contagious effect, surrounding yourself with happy/upbeat music can help alter your mood and make you feel better. According to a 2013 research study published in the Journal of Positive Psychology, music can effectively boost our moods. A similar study done the same year and published in Science further explained why this is. When we hear a song we especially like, or adopt a new song as a favourite, the brain’s reward system kicks into gear.

Bad Days can be a Good Thing

If you’ve ever seen the movie Inside Out, then you’ll know where I’m going with this. The age old saying “Too much of a good thing can be a bad thing” stands true in this case.

Just as experiencing emotions beyond happiness can have a surprising, positive side effects, bad days can actually be good for your long-term happiness. A psychology team from the Franklin W. Olin College of Engineering found that subjects who experienced a combination of happiness and sadness at the same time were more likely to improve their sense of mental health over the long run.

Yes, building a healthy outlook on life requires you to take the good with the bad. We can’t continually strive for happiness, as that will result in having the opposite outcome. Resulting in underdeveloped mental resilience and an unrealistic outlook on life.

While the connection between physical and mental health has been well established, it turns out that a little bit of physical activity has a significant, positive impact on one’s mental health, and in less time than what might otherwise be expected. Researchers have found that exercising just 10 minutes improves a subject’s mood, reduces stress, and generally enhances wellbeing.

As we mentioned in the intro, Abraham Lincoln famously stated, “Folks are usually about as happy as they make their minds up to be.” As it turns out, he knew what he was talking about. Modern-day researchers have found that our general happiness levels are about 50% genetic, 40% choice, and only 10% circumstantial.

Scientists have found that people who pretend to be happier will actually begin to feel happier. Just forcing yourself to smile brings about happier feelings eventually. That’s right folks it has been scientifically backed that if you’re not feeling happy, just fake it til’ you make it.

Taking a Break from Social Media goes a long way

Now that social media has been around for awhile, the effects it has on society and our individual lives are becoming better understood. For example, it’s been found that people who spend most of their online time on sites like Facebook describe themselves as having less self-esteem, fewer positive emotions, and fewer true friendships than those who limit their time on social media, or who don’t have it at all.

As you might expect, taking time out from social media does in fact help improve one’s happiness level. A group of Danish researchers asked a group of people to stop using Facebook for just one week and their life satisfaction, as measured on a scale of 1–10, went from 7.56 to 8.12. Those who continued using the social platform as they had saw their level of satisfaction remain static.

Social media isn’t necessarily a bad thing, just like all other things in life, it comes down to moderation. If you can be more purposeful with your social media use, you can reduce how much time you invest in it and ultimately bring about more happiness in your life.

Dance is a powerful thing, StarLord knows this and I think you do too.

JL Hanna, in The Power of Dance: Health and Healing, states that dance strengthens the immune system, eliminates stress and its effects. Dance therapy is a widely-accepted exercise to help patients with even more severe health issues.

I mean, it makes sense really. When you let go of all your cares and inhibitions and just enjoy the combination of music and exercise (two previously mentioned happiness contributors), then the overall joy is a given.

Some of your Happiness is Inherited

Did you catch earlier when I mentioned that general happiness levels are 50% genetic?

Well, according to researchers from the University of Minnesota, a portion of your happiness is inherited. The researchers performed a study on pairs of identical twins, and found that at any given time about half of their happiness was correlated to genetics. So, happy parents tend to have happy children, who would have guessed?

Dress for the Occasion

If you’re wanting to experience happiness, then you may need to dress for the occasion. What do I mean by that? Well, according to countless studies there has been a finding in the correlation between colours and the effect they can have on mood.

A 2010 study published in BMC Medical Research Methodology concluded that when we wear bright colours, such as yellow, the effect on our mood is positive. Conversely, wearing darker colours, especially grey, led to likelier feelings of moroseness, anxiety, and depression.

In conclusion, dress bright and vibrant if you wish to feel that way.

Happiness can be cultivated within family fellowship

Research that was conducted around the globe found that the world’s happiest children lived in Mexico, Spain, and Brazil — places in which close family relationships tend to be prioritised. Mexico also ranked first among countries with the “most satisfied people,” and second for “most optimistic people.” Studies have shown that children who eat dinner regularly with their families are much more likely to be healthier, more successful, and of course, happier.

Along the same lines, 74% of people who attend a church service at least once per month reported being “very happy,” while only 26% of those who never attend church could say the same. Community matters.

You don’t need to be told that playing with pets makes you happy, you can feel it all the way down in your jellies, but do you know why?

Studies have found that when we are around animals, our brain naturally releases oxytocin. Instantly giving us feelings of happiness and contentment, while also lowering blood pressure and reducing stress levels. This is due to our ability to identify and empathise with the creatures, almost taking on a parent type mentality in the process. Making time spent with the little guys feel quite rewarding.

So those are just 15 quick facts about Happiness to get you into the spirit of today’s International Day of Happiness, what are you going to do today to increase the happiness of yourself and those around you?