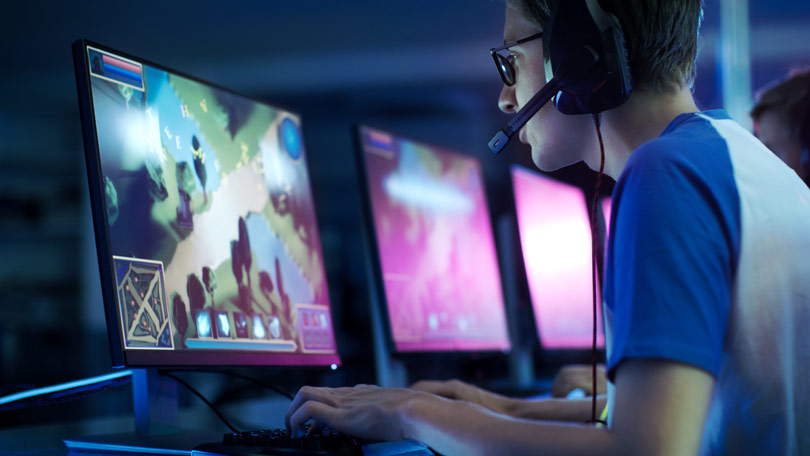 Playing video games can be social, stimulating and stress-relieving, as the activity keeps your mind engaged on tasks and objectives. This requires a lot more cognitive function than passively watching TV programming.

Video games are an ever expanding medium. The selection of gaming platforms are steadily increasing, game quality continues to greatly improve in leaps & bounds, and the growing demographics that have accepted and integrated games into their daily lives have currently reached their highest point and yet continue to rise.

With these stats around gaming demographics, it begins to dawn on you that your children aren’t just playing with other like minded kids. What can you do to prevent unwanted exchanges between your children and others within the online gaming community?

The best thing you can do is have a discussion with your children around the following:

In-game communication is a welcomed addition to online gaming, as it makes playing games online a lot more planned and teambased when you can communicate with your other teammates.

However, giving gamers the ability to say just about anything they like while being cloaked in anonymity, can have some undesirable results.

The greatest preventative measure anyone could take when wanting to avoid unwanted exchanges online is to simply mute both the in-game microphones and chat rooms within games.

Most games these days make the muting option quick and accessible for users, meaning any unwanted harassment can simply be ejected from the gamer’s experience.

Learn more about ways to control in-game chat for popular games at the Office of the eSafety Commissioner’s Games, apps and social networking web page.

Games are rated according to the level of violence, sexual references, course language and other mature content elements they may contain. This rating system is provided by people who have studied in content acceptability and what is not beneficial for young brains while they are still in the growth stage. If you’re a caregiver or parent who has allowed your young person to play R18+ games, think about the message you are sending them; that your word is above the law and that the law doesn’t apply to them.

It would seem that the anonymity of being online lulls users into a false sense of security, although there is a surprising amount of accounts that have personal details littered throughout. An easy jumping off point for either hackers or predators.

All that is required of them is the ability to weave some targeted questions through in-game conversations and they are well on their way to taking advantage of the unassuming gamer.

To avoid any unwanted visitors within your children’s online gaming profile, confirm with your children that they will not accept any friend requests or gamertags from people that they do not know.

If your children are playing highly-competitive online games, it is very much your responsibility to manage their expectations and give them a healthy outlook on what may transpire online socially with other players.

Letting your children know that the language within a competitive arena is privy to aggressive comments and foul-language, is a proactive way to change their outlook and soften the blow of hurtful comments from anonymous gamers.

Set clear guidelines and expectations for gaming. For example:

The Interactive Games and Entertainment Association (IGEA) releases an annual report into the demographics of gamers in Australia. The 2018 Digital Australian snapshot highlights just how popular gaming is as a pastime for children and young people.

Read more about the demographics of gaming in Australia with the Interactive Games and Entertainment Association’s ‘Digital Australia 2018 report‘. The IGEA also produced a series of videos exploring different aspects of gaming.

Read more about this research on the Office of the eSafety Commissioner’s ‘State of Play – Youth and online gaming in Australia.

The Benefits of Online Gaming

Playing online games can be good for you and your children! There are social, emotional and cognitive benefits to playing.

There is a negative stigma attached to playing video games from older generations as they see gamers transfixed on a screen and often dismiss that there could be any benefits gained from such an activity. However, online gaming can be positive for young people, as games require a level of interaction and skill from the player, unlike the passive viewing of television. This level of active involvement helps develop and improve parts of the brain.

WIRED conducted research into what impact video games have on the brain, and their hands-on testing resulted in the following:

Going over the list above, all the Pros noted in the study seem to be of the human brain having a positive response to games, resulting in overall growth in cognitive ability and motor control, while the short list of Cons tend to be a result of excessive gaming. Both cons listed, simply require moderation and balance just like all things in life.

The key to moderation being that users need the self-awareness to monitor their engagement in an activity that can become highly addictive. Games have a powerful connection with the reward centres in the human brain and can be a quick and easy way for users to feel the euphoria of accomplishment without truly achieving anything outside of in-game objectives.

In conclusion, you will get more learning gain from smaller game sessions spread out over time rather than one big block, and cognitive function has only been observed to have either a positive effect or none whatsoever, there are no cases where gaming has caused cognitive damage or worsening in performance over time.